“Space is big. Really big. You just won’t believe how vastly, hugely, mind-bogglingly big it is. I mean, you may think it’s a long way down the road to the chemist, but that’s just peanuts to space.” Douglas Adams – The Hitchhiker’s Guide to the Galaxy.

You could be accused of being over dramatic if you replaced the word “space” above with “Wendover Woods 50” but for those who did it, at times it felt like it.  But anyway, I’m jumping ahead of myself…..

The wait was over, the training was done, the miles were in the bank and there was no more time for worrying.  The Wendover woods 50 mile race was here and I started brilliantly by stepping out of my car, in a cold field in Tring at 7am, into a giant poo.  Undeterred, I squelched my way to the start line and looked around for the other Project Trail guys.  Soon meeting up with Nic and Jon, we were a mixture of excitement, compression gear and fear.  Glancing around the field I could tell this was for the big boys, with the Centurion Running Grand Slam title at stake some people were going to be flying round this. 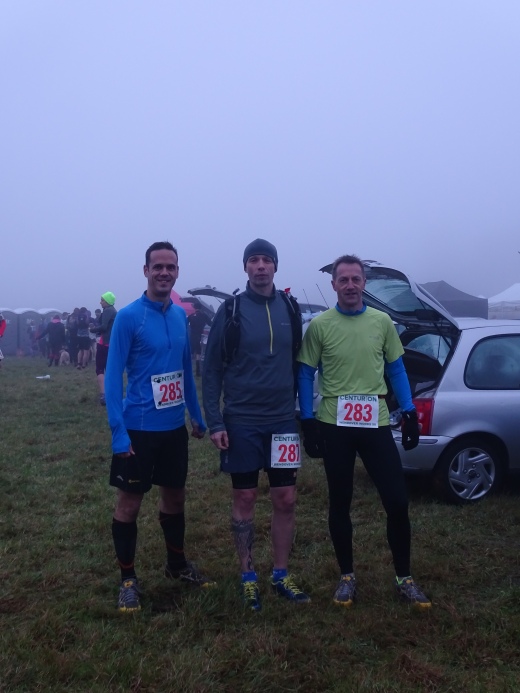 The Wendover Woods 50 is, as the name suggests, “a 50 mile foot race consisting of 5 x 10 mile loops on forest trails, entirely within Wendover Woods”.  Just for fun though, nestled within those beautiful sounding woodland trail laps was 2,900m of climbing.  Which, I can now tell you from experience, is a lot.  The race organisers, Centurion Running, had tactfully named some of the sections; “Hell’s Road”, “The Snake” and “Boulevard of Broken Dreams” presumably to somehow keep the spirits up!

Since winning a place in this race from Men’s Running and their Project Trail feature, the pressure was on.  We’d been featured in the last five issues of the magazine to report on our progress and had training plans devised by Robbie Britton (Team GB Ultrarunner) to get us all ready for the day ahead.  I’d trained hard, and had some great races and running experiences along the way, but nevertheless earlier in the week did have quite a flap about my ability to actually run 50 miles.  By the time race day arrived, I’d decided to put those worries behind me and thought the best tactic was to just get on with it.  I had a proper “plan” for this one; eat as much as I possibly can, drink as much as I possibly can, take it easy at the start and finish strong.

I knew that the first couple of laps just needed ticking off, and the Project Trail guys and I had suggested we start together.  This was great to take it reasonable easy, have a chat, keep the spirits up and get used to the course.  During the start of the third lap I slowly peeled away and realised it was time to go this alone.  The laps consisted of magnificent forest trails, some mud and numerous short(ish) sharp climbs. 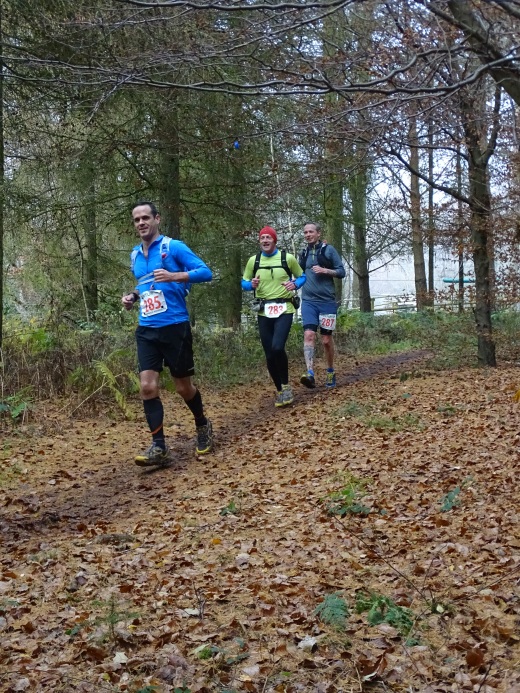 Somewhere around the third lap I saw Gary Dalton, an ultrarunner I’d met the previous year at the Adidas Thunder Run.  He was doing a couple of laps in reverse as moral support for the runners and our exchange went something along the lines of……

“Hi Dan, how you feeling?” said the self-confessed moany trail runner.  I gave an honest reply saying that I was feeling pretty good.

“Well why are you walking then!?” came the response.  I processed this for a few moments and came to the conclusion it was a very good question, so run I did.

… and so the day went on, taking each section as it came.  At one point during the “Power Line” segment I emerged into a large open field.  This is a brief pleasant change to the woodland trails and due to the time of day, the sun was coming down bathing the woodland surroundings in a beautiful light.  I actually outstretched my arms and leant my head back, either praying to the Great Running God, or to take in as much vitamin D as I possibly could.  As I crossed the field I bumped into my number-neighbour (284), a young lady who I can see from the results was Rachel Dench.  We had a quick chat and I started wittering on about what a fantastic moment this was and hopefully sharing some of my current positivity.  A short while later, re-entering the woods, we shared some jelly beans and and I was on my way.

In a bizzare mind-game I was actually looking forward to lap four.  Well past the halfway point I’d already decided this was going to be a self-indulgent lap so I put my headphones on some to blast out some of my favourite songs and really started gritting my teeth to get round.  I had a couple of moments of euphoria during this lap as I knew I was well on my way to complete it, and nothing was going to stop me.  I was doing my two favourite things, running in the woods and listening to some crushing metal and hip hop, I had a few moments of dancing and punching the air – sorry to anyone who saw that and thought I’d gone barking mad but in some ways I think I probably had. 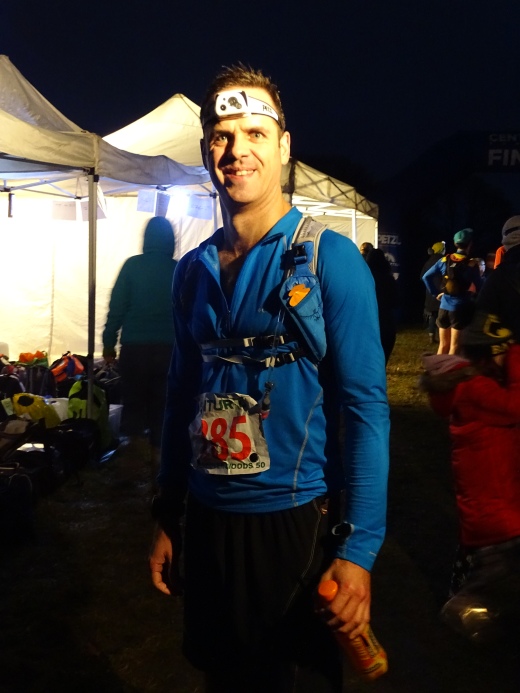 Finally I was at the business end of the race and strapping on a headtorch for the final lap.  This one needed a bit of focus as tiredness was setting in and you really had to concentrate to stay on track through the winding woodland paths, but it has to be said the course markings by Centurion Running were excellent.  I started the lap with a nice chap called Mick and we had a good chat but I soon pushed along and ended up running most of this lap alone. The field had really spread out by now so other humans were few and far between.  After a final push during the viciously steep last 2km, suddenly (well, more accurately, 11 hours, 2 minutes and 15 seconds later) I was over the finish line.  My friend, and top-running buddy Michelle, had come along to the end for moral support and was probably twice as cold as I was, so massive thanks for making an appearance!  Immediately people were thrusting medals, t-shirts and minestrone soup at me, which was a great way to finish.  The whole Project Trail experience has been fantastic, its magnificent to have completed it, but of course I’m slightly sad its over.  Not one to mope, I can now enjoy a little relax and look forward to the ultras I already have booked for next year.  Game on!

Cold and needing a beer……  I was a bit chilly as well.

A few of the details and stats below for the true running geeks:

I finished in 43rd place with the laps times below:

I think the main thing I’m pleased with (other than finishing!) is that my laps were reasonably consistent. OK, I slowed down a bit for the fourth lap but then somehow negative split the last one in the dark with a head torch.  Despite the inevitable tiredness I just wanted to get this lap done.

Not that I’m an expert at these things but I definitely learnt a few things during this race and got great advice from Robbie Britton.  Here’s some summary thoughts, a mixture of my own experience and advice given:

And to the other project trail guys, Nic Porter and Jon Gurney (and support and photographs from Chris) – fantastic effort all round and achievement for us all! And of course Vicky Stinton for putting up with my continuous training and talking about running!